What are the Advantages/Disadvantages of tDCS and tACS 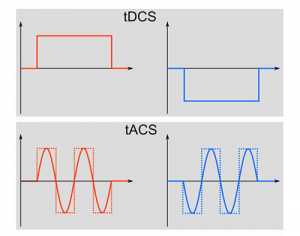 You might be wondering what the difference between AC and DC Transcranial
Current Stimulation is. In short, tDCS and tACS have different stimulation
paradigms. From the diagram below, you can see that direct current will
typically be switched on for several minutes, while tACS uses alternating
currents for either rectangular (dotted line) or sinusoidal (solid line)
stimulation.

tDCS as the most prevalent method

tDCS is the more prevalent method between tDCS and tACS.

Although it is still considered an ‘experimental’ form of brain stimulation just like tACS, it has been well-researched as valuable for the treatment of a variety of neuropsychiatric conditions. Some tDCS brands on the market include Caputron, BrainDriver, Apex, and Focus Go, who have developed tDCS devices widely used today in clinical settings and by individuals worldwide.

Which do I prefer?

Due to the fact that much more research has been done on tDCS devices and
it has become widespread in the market, tDCS devices seem to be more
reputable. Stimulation with direct current has shown to be valuable when
looking at the effects of cortical modulation on networks in the brain, having
site-specific effects. These significant effects on high-order cortical processes
in sensory perception, pain, language, memory, and more prove more
valuable and notable than AC stimulation’s modest effects on cortical excitability.
However, there are definitely opportunities for cranial AC stimulation to
emerge as one of the new options in brain stimulation therapy. Studies have
shown that motor evoked potentials (action potential elicited by noninvasive
stimulation) are significantly increased with tACS but not tDCS and the mean
stimulation effect is higher with tACS. They have many similarities in that
tACS can also treat high order cortical processes and neuropsychiatric
conditions, however, tDCS devices are already well-established and has
much less skepticism surrounding it.

TheBrainDriver tDCS and the Fisher Wallace tACS devices have been a game-changer in the neuromodulation world, and have helped enhance performance, alleviate symptoms of psychiatric conditions, and help patients with brain injuries.

What are the differences between tDCS and tACS when it comes to what they offer? Let’s take a look at the two specific devices we will be addressing in this article.
The BrainDriver’s professional “Brain Driver V2 tDCS device” is a classic tDCS device with digital output and precision controls. It is considered the highest-rated consumer tDCS device in the market and is marketed towards “peak performance enthusiasts”.

The BrainDriver was founded on the values of learning and attaining a peak-state for focus and energy. Their product is a ready-to-use device that includes user-friendly safety features like overload protection and others to ensure you have a comfortable and effective session.
Many studies have been conducted using the Brain Driver V2 and have found benefits relating to enhanced mindfulness, pain reduction, improved sleep and mood, and accelerated performance. The low-intensity stimulation it provides modulates the spontaneous neural activity in polarity-dependent fashion and has site-specific effects that are perpetuated throughout the brain.

On the other hand, the Fisher Wallace tACS device works by stimulating serotonin production and modulate brain oscillations. Fisher Wallace is another giant in the neuromodulation market, where their focus is on treating depression, anxiety, and insomnia.
The device has the ability to casually links brain oscillations of a specific frequency range to cognitive processes – therefore, if specific frequencies associated with a cognitive function are known, tACS can be applied at that exact frequency.
With this brain stimulation device, the classic sponge and electrode format is used, and you can engage in quiet activities like meditation or reading during your 20-minute session at home. There are no risks of seizures and has shown to be a great option for those who conventional therapy do not work on.

While all these advantages sound top-notch, both devices do have some of their unique disadvantages.
Because of the lack of specificity in the Brain Driver V2 tDCS device, there is a high potential for placebo effect to occur and it is hard to define localization of the electrodes. This causes a large variability in effects between individuals and lesser consistency. It is shown that the results from using the device bring about large variability for individuals.

For the Fisher Wallace tACS device, the device’s basis in general is less well-understood than tDCS devices like TheBrainDriver and has a lack of electrophysiological evidence. Despite its ability to be specific with frequency, when needing to inhibit particular brain regions, it is impossible to do so.

Which is more prevalent?

The most prevalent method of neuromodulation is tDCS. tDCS has been well-researched over the years, resulting in many companies creating their own tDCS devices, from classic devices with sponges and electrodes to the brand-new headset-style device. It has been so reputable that large companies and clinics have used this treatment for neuropsychiatric conditions.

Which do I prefer?

Despite tACS’s lesser known reputation, Fisher Wallace has become the most well-known brand to market FDA cleared tACS devices.
While the market is saturated with tDCS devices, Fisher Wallace chose to offer alternating current over direct current. Many Fisher Wallace stimulator reviews have deemed the device effective in many studies, including one in the Journal of Affective Disorders. It has also been designated by the FDA to be minimally invasive and is FDA approved for use of symptom reduction for pain, insomnia, depression, and anxiety.

Due to the fact that much more research has been done on tDCS devices and it has become widespread in the market, TheBrainDriver’s Brain Driver V2 seems to be more reputable. Stimulation with direct current has shown to be valuable when looking at the effects of cortical modulation on networks in the brain, having site-specific effects.